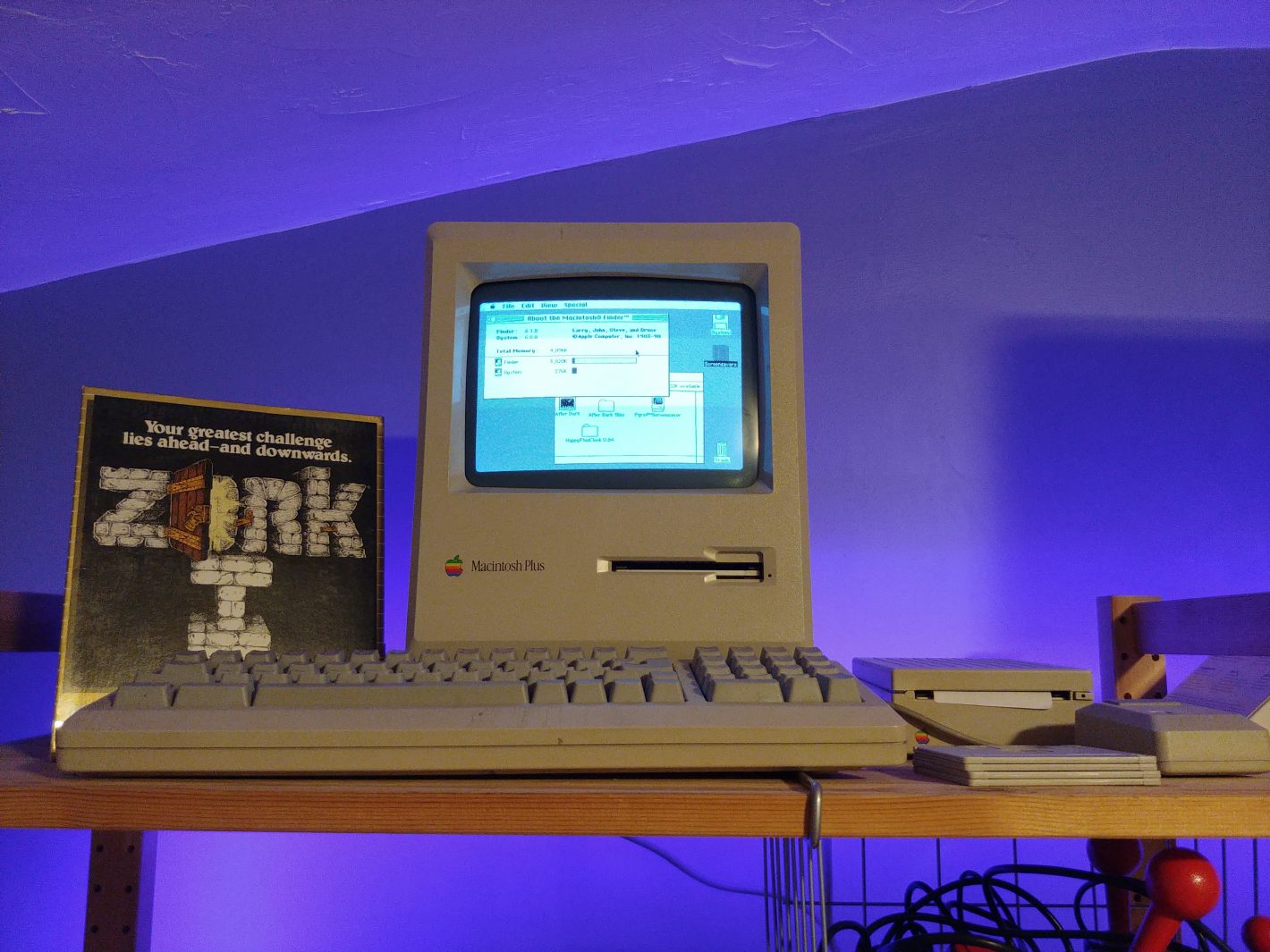 I picked up a Macintosh Plus years back at a vintage computer show and it’s mostly sat around as a conversation piece. It was one of the first of the iconic toaster Macs and people loved seeing it in my office. The thing rarely worked. Sometimes I could whack it on the side and get it to boot, but mostly it just displayed the simasimac pattern on the screen and refused to do anything.

I’ve always been afraid of poking around in one of these because of the bare CRT tube inside and the thousands of volts of electricity that could be waiting for me to brush my hand along the wrong part of the picture tube. But a funny thing happened when I turned 40. I stopped worrying and accepted that I know what I’m doing after all these years. So off came the back of the case!

I disconnected everything from the analog board which provides power to everything else in the computer, including the CRT. After clearing off 34 years off dust with some compressed air, I re-flowed the solder on all of the larger components on the board. Over time, heavy parts like the flyback transformer come a little loose. They stress the solder joints that both hold them in place and connect them electrically to the circuit board. The solder cracks and the parts no longer work reliably. This is particularly a problem when boards are mounted vertically like inside the Macintosh Plus.

Next, I turned my attention to the logic board, Apple’s term for a motherboard. Here, I was surprised to discover a MicroMac Performer accelerator mounted over the CPU! I’ve had this machine for almost two decades and I had no clue it was in there. This accelerator board has a 68030 processor that improves the Mac Plus’s performance by 300% once the right driver is loaded. Combined with the 4 megabytes of RAM installed, this should be a very capable machine for its age, on par with the much coveted Mac SE/30.

I cleaned the accelerator’s connector with some Deoxit Gold contact cleaner, and gave the four RAM SIMMs the same treatment. Not only did this clean their surfaces, it’ll protect them from corrosion for years to come.

Everything is back together and it’s working great. So what’s next? I have a FloppyEmu on the way so I can use an SD card in place of ancient floppy disks. I picked up a set of System 6.0.8 install disks off eBay. And I know where to get the accelerator’s driver files.

I expect the next couple months will be spent getting to know this machine a lot better and exploring what it can do!

UPDATE: The next morning, I went to boot my old friend and it had the simasimac pattern again. After two days of reflowing solder on pins all over the analog board, I had a working Mac Plus with a black screen. If I tapped the side of the machine, I got a brief flicker of the desktop. Luckily, someone had just posted about that symptom on a vintage Mac group on Facebook and the solution was to re-flow the pins on the connector where the analog board hooks up to the logic board. I freshened things up on both ends and…fingers crossed… everything works great now. I hooked up the FloppyEmu this afternoon and messed around for a little bit.